Review from Lily on  The YA Bookcase on Lake Street

The Book of Wonders by Jasmine Richards 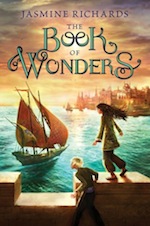 Magic, Djinn, Ogres, and Sorcerers.
Thirteen-year-old Zardi loves to hear stories about fantastical beings, long
banned from the kingdom of Arribitha. But anyone caught whispering of their
powers will feel the rage of the sultan—a terrifying usurper who, even with his
eyes closed, can see all.
When her own beloved sister is
captured by the evil ruler, Zardi knows that she must go to any lengths to
rescue her. Along with her best friend, Ridhan—a silver-haired, violet-eyed boy
of mysterious origins—and an unlikely crew of sailors led by the infamous
Captain Sinbad, Zardi ventures forth into strange and wondrous territory with a
seemingly impossible mission: to bring magic back to Arribitha and defeat the
sultan once and for all.
~Goodreads
Reviewed by Lily, age  10
The Book of Wonders is a  really, really good book.  Do not judge the book by the cover which looks pretty
boring because it is a really good book.
The  story is exciting and  suspenseful.  The book has great characters, including Zardi who is the main
character.  She is a strong and an adventuresome girl on an adventure in a  fantastical new world in an effort to rescue her sister from almost-certain  death.    The story is cleverly woven and requires the reader to travel through  time and space as well as decipher some of the “mysteries” of the  plot. I highly recommend this book  for boys and girls ages 8-12.
Thank you to Harper Collins
Children’s publishers for this excellent book.
This book is in stores
January 2012!
Buy Hardcover
Happy reading!
Lily, age 10

This site uses Akismet to reduce spam. Learn how your comment data is processed.